I started making some footed bowls during the Pecked phase, and I decided to try to expand on that with a bag of clay I found and reconstituted.  Free clay = no waste if it turns out terrible. 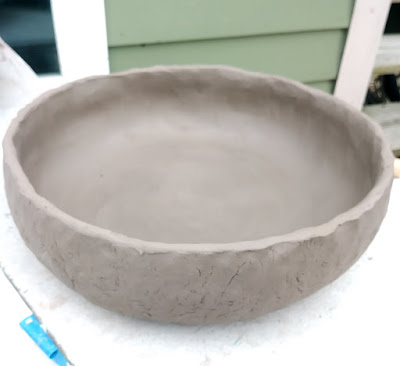 Pushed it out almost like it was on the wheel, but slow and on a lazy Susan instead.  The outside made a kind of crust (I refer to these as Bread Bowls) when the surface cracked as I expanded it out.

With the width being what it was (big bottomed) I wanted to make sure it was stable and supported.  So six feet did the trick!
I tried some new glaze combos I was experimenting with and am really happy with the result. 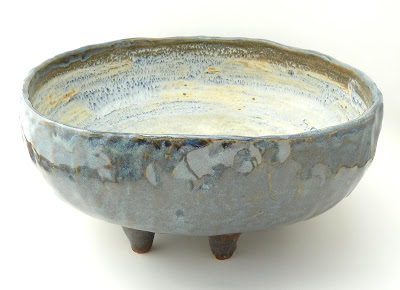 This one cracked on the bottom but not all the way through.  I've been having issues with cracking and it has to do with the clay and the craftsmanship...still learning!  If they crack all the way I just turn them into planters.  Problem solved!

I formed the so-called Cloud Bowl over a mold, then added feet and flipped over when appropriate.  You never know if it will survive the flip, if the clay is hard enough, if the feet are connected enough or centered right.  You just have to keep making them until you figure it out, and even then you can put a lot of time into a project and it just dies.  But this one survives!!  I love the glaze, it's the same combo as the Six-Footer.
Not only did this wide thing crack, but there is a big whammy, too...probably my fault.  It showed up when I picked it up from the bisque fire.  I left it to dry a long time, but there could have been a piece of debris in there that caused it to pop off during firing.  But I wanted to play with glaze anyway and spent quite a bit of time constructing it, so I just persisted. 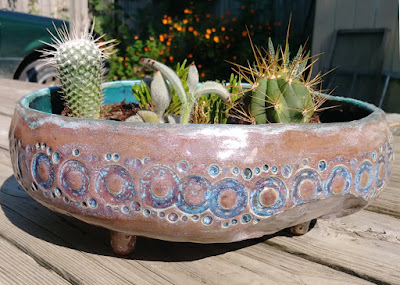 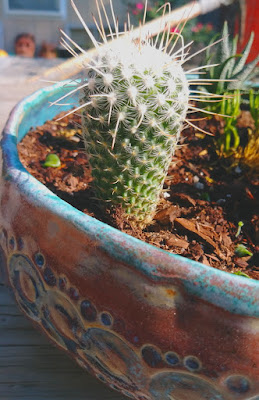