Bird of Columbia and New Tributary

This is the story of some black and white pieces.

I was thinking I'd make a diptych out of these two 24 x 24 inch pieces.  The backgrounds are mostly black with some greys and a hint of red.  For whatever reason I decided they needed to be two individual pieces.
The one on the left became "Bird of Columbia" based on a friend's observation that the image looked like a picture taken from a Bald Eagle nest cam in D.C. that was live at the time.  (Bird of Columbia is another term for American Bald Eagle, and this title is taken from a poem I found online by Charles West Thompson.)

It is currently part of the annual River Market Regional show at the Kansas City Artists Coalition.
So, I thought I finished this other one at the same time (not completed in the image above) even though I was never quite satisfied with it.  Maybe because it reminded me too much of a pair of legs?  But I called it "Tributary" because...it looks like a split in a river.
Here they are installed in Ann Arbor.

After looking at it for while I reminded myself that I am The Boss and Ultimate Creator of my own work, and I make the rules, and break them.  So I filled in the gap and it just feels so much better to me.  I like leaving a little hint in the corner of space/land/air.  I retitled it "New Tributary" because that's totally accurate to the object itself, and a person can extrapolate from there if they want.

I'm going to be reworking more pieces because I just can't help myself.

Don't forget, I'm on Instagram!
Posted by Desiree at 4:00 AM No comments:

Here's another biggie that I painted in tandem with the last piece I posted about.
It's 48 x 48 inches, and I had a lot of fun with the paint on this one.
I didn't want to repeat exactly the technique from the large piece, but I wanted to keep them related, so I pushed thick paint around the surface with my big paint brush. 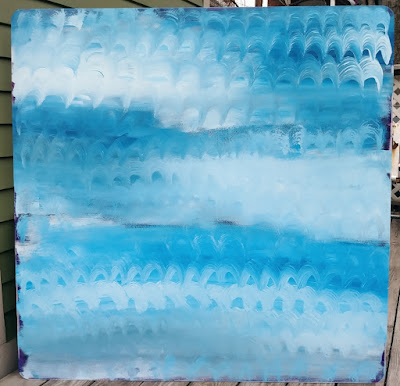 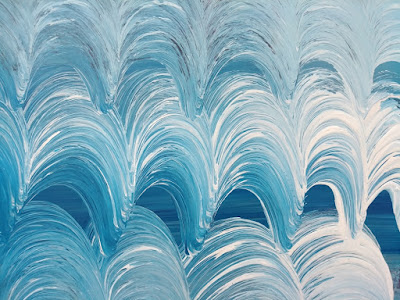 The color was too much like the other one (I did use much of the same paint at the same time), so I covered it in a black wash and did some major sanding to reveal the texture.
Here's the progression of the orzos.  A big sweep to some crazy tiny ones.  I used some guide lines made of vinyl to keep myself in check if I started to go astray.

The black vinyl is quite shiny and sort of impossible to take a picture of in my working environs, and I just use a little point and shoot camera, so I plan to get some more professional shots taken to do it justice.  I also might sand over the top to matte the surface--still thinking about it.  They're all living things.
A friend saw this and said it reminded him of a dress with a v-neck bodice.  I've been thinking about that and came across a poem (the same from the last post, actually) with this line in it and the pairing makes sense to me.

"The midnight reeled with laughter of rioting women and men,
Sleek waiters tiptoed after and brimmed the glasses again,
Till the night was blare of ragtime and red with lust and pain.

For this is the brood of the cities, elegant, debonair,
Men with the scars of license and women with shoulders bare--
But I have swung in the saddle and swallowed the prairie air."

From "A Challenge to Youth" by Willard Wattles, 1916
Posted by Desiree at 4:00 AM No comments:

I've been away for a while.  But that's because I've been making things!  And traveling!  So...enjoy the upcoming posts of some works while in progress.

I think I started working on this one back in March.  I took advantage of a nice day or two before it got cold again to paint this 48 x 48 inch piece.  I first primed it, then spread on a thick layer of blues.  While the paint was wet I dragged an old brush through it to give some texture. 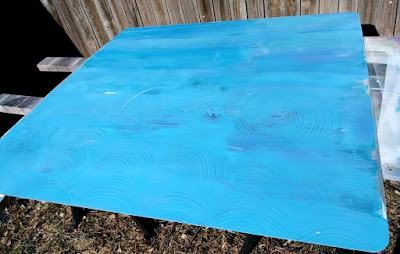 I painted it a light blue/white and sanded it to reveal the texture better.  Those steps were not recorded (sorry).

Blue and green were calling out to me, but when I started I ended up adding the colors in too-thick of blocks.  So after a while of putting on orzos, I actually peeled many off and shuffled the colors more.
Maybe you can tell from the photo that I mixed them up more.  I just know I spent a lot of time putting on things and then peeling them off and putting on more.

The title comes from a poem called "A Challenge to Youth" by Willard Wattles, 1916...

"Lo, this is the song I shape you, a song for the strong and fleet,
A sword for the arms that wrestle with slippery shocks of wheat,
A flag of the dreams of Kansas by wide winds winnowed sweet."

There's a lot of military imagery in the poem, and dichotomies between cities and the prairie, and I am not a literary critic, so I won't be breaking it down.  Honestly, I just like the idea of sweet winds blowing around tree limbs.
Posted by Desiree at 4:00 AM No comments: