We have a certain clear glaze at the Clay Guild that creates runny, drippy, watery surfaces and fluxes with any blue colorants.


And now...tumblers!  I decided to try some surface color decoration that didn't involve impressions because...I got some free stuff and wanted to try it out!  A classmate (Deborah Gendel--look at her work!  It's great!) gave me some underglaze and Stroke & Coat, a Mayco brand product that is great for painting and line work.  I have simple, primitive decorating skills, so I decided to go with lots of stripes and some dots to start learning about this application.  I also used mason stains mixed with white glaze to make my own colors.  The next several posts will be from this ongoing product line.

This one has sold, but I have most of my others listed in my Etsy store.

Posted by Desiree at 4:44 AM No comments:

This reddish vase was made from some free clay that was laying around the Clay Guild and given to me as a gift for being a human garbage can.  It's bronze stoneware, so it reacts with the glaze differently.  Also, it was fired to cone 10, which is complicated to explain but let's just say it gets a lot hotter in the kiln when that much energy is used.

Posted by Desiree at 4:39 AM No comments:

In the coming weeks I'll just be posting pieces I've made throughout the year... 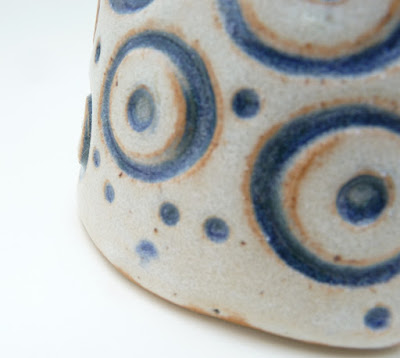 Posted by Desiree at 4:38 AM No comments:

These are my "everything" mugs.  I also have "everything" vases.  I use my plethora of doodads to impress heavy designs into the clay while it's still a slab, then form it into a mug and add a handle.  Handles are difficult and I'm still working on my confidence making and attaching them, but these were a fun little run of mugs and I have a few left in my Etsy store if you're interested...

I started really loving the wipe on/wipe off technique and decided to go all in with texture and impressions.  This lead me to make some little things I called yurts.  Only a few came out that I didn't think were totally ugly (a very common thing in ceramics) and I used what I liked about them to continue making more functional pieces...stay tuned for those. 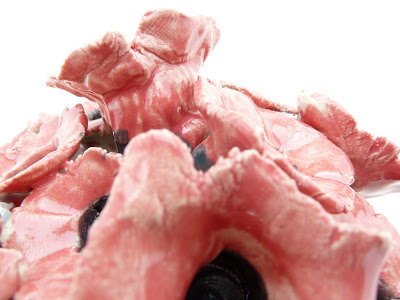 Posted by Desiree at 3:00 AM No comments:

Ceramics and My Muse


I joined the KC Clay Guild a year ago.  After spending time at my friend Amy Meya's house every December for our open studio sale, I always get nostalgic for my clay days back at KU.  Although I got a degree in sculpture, the ceramics department was just next door and I took at least four classes ranging from the basics to mixed media ceramic sculpture.  It had been literally years since I made anything that could be considered truly 3D, so I signed up for a class that Amy was teaching.

And I fell back in love!

I do not wheel throw, I hand build.  They are very different and my perfectionism gene would have been an ugly beast to tame had I decided to hit the wheel.  With handbuilding, it's basically impossible to attain a certain kind of perfection, so the pressure was off and I could just focus on reintroducing myself to mud.

Early on, I decided to play around with making impressions in the clay and forming functional pieces from that.  It's no surprise that my barn and Dumpster picking immediately made its way into my aesthetic.  I was using bits and bobbles from here and there, and then I got an idea!  IBM SELECTRIC TYPEWRITER BALLS!  I have two glorious Selectrics and had some extra balls from the one I grew up with (the other is from my in-laws, who were happy to get rid of a 40 lb. monstrosity).
I decided to just roll it into the clay and see what happened.  Well, good things happened and I made a lot of tumblers, vases, and dishes with my growing collection of type balls (thanks, eBay!).

I wanted to highlight the texture, so I used a wipe on/wipe off technique for glazing, then dipped the top of the tumblers in glaze to make a nice smooth surface for your sweet lips while sipping.


Here are some vases, too!  I am having fun dying the clay body with mason stain to add another dimension to the pieces and learn more about this mysteriously simple material called clay.


I am still working with clay--I'm addicted now--and will be sharing more of my creations that are actually for sale in my Etsy store.  Also, I'm discontinuing my clocks, but I have a pretty large inventory, so they're still available for now.  I'll be discounting them through the year, but if you're interested, please contact me and we can make a deal.

My INSTAGRAM is still going strong, so see announcements there.
Posted by Desiree at 4:00 AM No comments: