Made It: Bring Treasure

Another round one, this time with rainbow ombre!
I almost never sketch, but this one was tricking me for some reason.  Digital sketch for your pleasure... 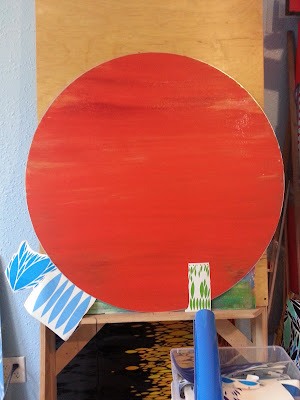 Title from "The Hands That Cling" by Esther M. Clark
Posted by Desiree at 4:00 AM No comments:

After the big hullabaloo of the Women to Watch | Metals opening at the Kemper, I decided to dive back into making.  I so loved how the painted background turned out on this one that I chose a design that wouldn't completely obliterate it.
Lots of details ahead... 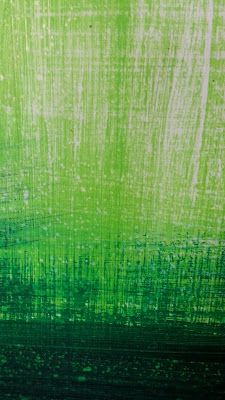 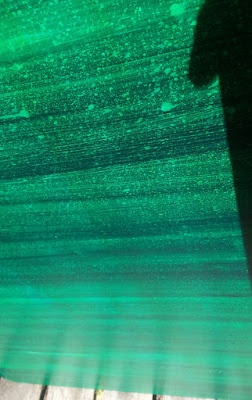 When it was time to put vinyl to aluminum, I took some inspiration from a tiny collage I made a couple years ago.
At first it sorta turned out like a mountain, which didn't float my boat.
So I peeled off some outside orzos, contoured it, added some more here and there, and I was much happier. 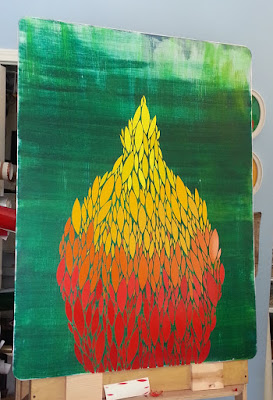 The title wasn't taken from poetry, I did some good old thesaurus work with ideas of fire.  "Rouse" like "aroused" like "growing" and whatnot.  I can come up with them on my own sometimes, see?

CHECK OUT MY INSTA FOR FUN STUFF.  It's fun to me.  Lately it's mostly ceramics because it's too cold to work outside and I have to sand outside so I don't die of particulates and whatnot.
Posted by Desiree at 4:00 AM No comments:

Made It: A Border of Memory

Another very big piece.  Complicatedly simple.  This little piece was my inspiration.  This was one of the first non-clock orzo sketches I tried out three or four years ago.  It's about 8 x 8 inches.
The layers were all shades of black with a hint of crimson here and there.  I dragged a scrub brush through the wet paint to add texture. 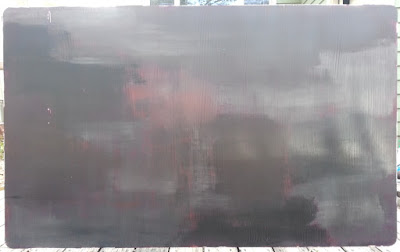 As I went along I decided to start adding in reflective silver orzos into the design.  Without a flash or other bright light source it's barely noticeable, but if you use a flash on your camera you get a whole new perspective.
Look at that glow!  Magical. 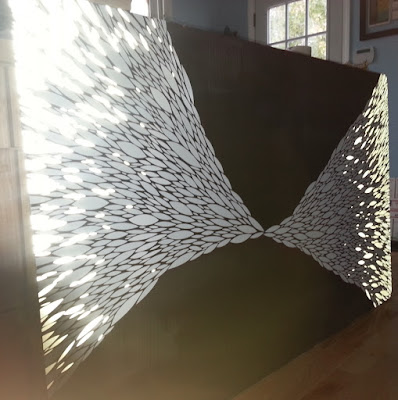 Title from the eponymous poem by Florence L. Snow.
Posted by Desiree at 4:00 AM No comments:

Email ThisBlogThis!Share to TwitterShare to FacebookShare to Pinterest
Labels: a border of memory, black and white, florence l snow, kansas poetry, made it, orzo, reflective, vinyl

Made It: Hot Brazen Heavens

This is a story of redemption.

I made a line of extra large clocks.  People liked the big impact of the graphic goodness, but some didn't want the actual clock part.  So I tried out just doing the background and not adding the mechanism.    But after I started making larger, more complicated Orzo pieces, I thought the unpainted, one-layer-of-vinyl finished piece above was kind of boring.  Still great, but looked out of place among its younger siblings.  So I painted it!  I painted right over the vinyl and everything.   Fun fact, the dark purple orzos were de-laminating anyway because the adhesive was apparently not very strong, so I just yanked them off and decided to see what happened.  (This happens when you get leftovers.)
I took some in-between process shots but they are terrible.  Sorry not to have any to share.

You can see the ghosts left behind by the pulled off purple orzos (some were sticky enough to grab and keep some paint even through sanding) and some nice aluminum peeking through.
Improved!  Redeemed!  Visual movement achieved!
The title is much better, too.  From the poem "Good-bye to the Cottonwood" by Margaret Hill McCarter.

You can go back through my Instagram feed and see a video of the sanding process if you want.  It's kind of magical.  It's from June 27, 2017.
Posted by Desiree at 4:00 AM No comments:

You know those big circular railroad crossing signs?  I get them without any signage on them and make them into art.
Working with a circular substrate is fun but sometimes a little hard to get started on.  I decided to use the curved edge in the design but kept the background paint marks straight. 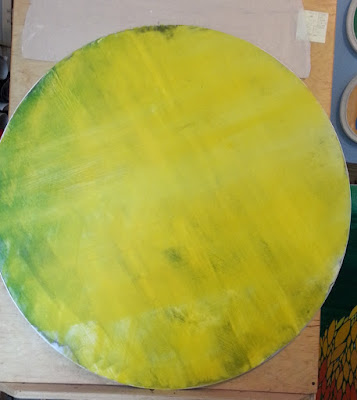 I kept fighting the look of a black and white cookie and tried to hug the edge without just tracing it.
It took a long time to decide which direction is up on this one.  Certain positions made it look like an ocean wave or moon, which I didn't want.
I titled it "Flock."  You can guess why.  Around this time I watched The Birds but I'm not sure if it was before or after...or if one had to do with the other.  Abstract/non-living birds are better for indoors than the other, more annoying/loud/pooping kind.

Made It: Hard-Handed, Tender-Hearted

This is the largest piece I've made to date (along with its size-twin I'll share later on), being as wide as I am tall.  I chose that length because that's what fits in my truck while still being able to shut the hatch.  The gallery I was making these for could only accommodate pieces that were 40" tall, so that gave me the limit on that side.  Conveniently, that size exactly fits between my wheel wells in the truck, so it was meant to be.

To begin on something this large can be intimidating.  So I just threw every color at it I already had out...that's typical of how I work.  If it's within arm's reach it's not safe.


After I got the background finished I tried out a few different approaches to adding the permanent vinyl layer.  This image is from me adding black and white orzos going from the middle out, but I decided against it and used that motif in the other large one I'll share in a coming post.
I chose to go with SO MANY pieces of simple black orzos dripping from the top.

Here's what some of the ones I've shared this week look like staged in my show tent...gives a little better idea of proportion and scale.
The title of this one comes from a poem by W.H. Simpson called "John Brown."  I guess he, like I imagine many farmers and pioneers, worked hard but had a soft side.  John Brown is Kansas's favorite terrorist, by the way.
Posted by Desiree at 4:00 AM No comments:

Made It: Summer Bends and Smiles

I loved the colors on this one from the beginning and tried to keep it throughout the process.  You may notice some little designs here and there stamped into the paint.  I made some stamps to be used in my ceramic pieces based on some clocks I made a few years ago and sized them wrong, but decided to see what would happen here, and I loved it so added the design into many of subsequent pieces. 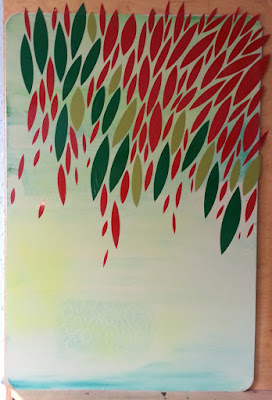 At this point I decided I was done with the background and wanted to add the final layer of permanent orzos.

I was inspired by "Tempting Feast of Good Things," although I'd made several in between the two.

Title taken from a line from "Sunflowers in the Corn" by William Wattles
Posted by Desiree at 4:00 AM No comments:

Made It: Tempting Feast of Good Things

Oh, hi there.  It's been a while.  I've been doing some stuff.  And also not doing anything, which is the way things go this time of year.

Since September I've been working on several large pieces that were installed mid-December at the University of Michigan Medical Center through the Gifts of Art program.  They'll be up until mid-March.  I took some progress shots while working on the collection (called "Prairie Mantras") and I'm going to share in the coming posts.

First up: Tempting Feast of Good Things
I primed and painted many aluminum pieces at the same time, looking at color combos.  The red one there is what ended up being the above piece.  Here I'd only primed and put on maybe two layers of paint.
Then I put on vinyl as a mask in an orzo design and painted over.

After I peeled off the vinyl I sanded the surface to soften it up and bring back some of the under layer.
Rinse and repeat.
After the second layer of applying, painting, and peeling, I painted and sanded again, this time with blues.  Then added more vinyl AGAIN. TWICE.
Paint, peel, sand, paint...I really wanted all the layers to show up so I added more of a wash at the end, the purple and blue really got the other colors to pop. 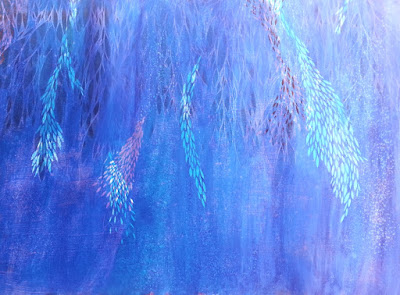 I felt like I was channeling Maxfield Parrish and didn't want to screw it up, so I just added some lavender orzos as a little hill on the bottom to create a dreamy, under-big-trees-in-summer feeling.  I'd like to visit that place.

And, once again, here's the finished product: 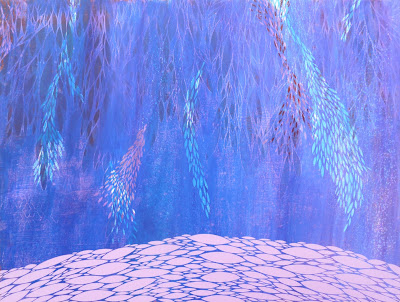 The title, as with most of my work nowadays, comes from a book, "Sunflowers: A Book of Kansas Poems," I found at my grandma's house.  Published in 1916.  The particular poem is by William Allen White called "Where a Lovely Time Was Had."